We arrived at Marple thinking we had the day wrong as there wasn’t a single person around and the club house seemed deserted. However the pro appeared and a little later we were shown to a coffee machine. The only member of the Portland who is also a member of Marple Chris Miles was a strong contender and my betting money with his high handicap was going on Chris. Imagine my despair when Chris arrived looking a little pale and complaining of a bad back forcing him to miss his chance of a winners cup.

Nevertheless 24 prime athletes lined up to take on the Marple course. John Martin true to form arrived at the last minute and just about had chance to claim his bacon butty. The rollover of the two’s prize money from Denton produced a hum of anticipation among the participants, at least I think that where the hum came from.

There was no real issues on the day except that the pair entrusted with putting out the nearest the pin markers and longest drive failed miserably (John Martin – Chris Murphy you were given one job).

Anyway on to the results. Unusually there were 5 par 3’s on Marple (this maybe what confused dumb and dumber) This meant that the handicap secretary was remiss in not doing his pre game check and acquiring an extra Steve Payne patented pin marker. That meant that the carry over 2’s money had less chance of surviving here. As it was 3 people achieved a 2.

The result was a 3 x 2 card play offs with the battle of the Andys for first place. The ever improving Andy Minshull pipped at the post by Andy Howarth . 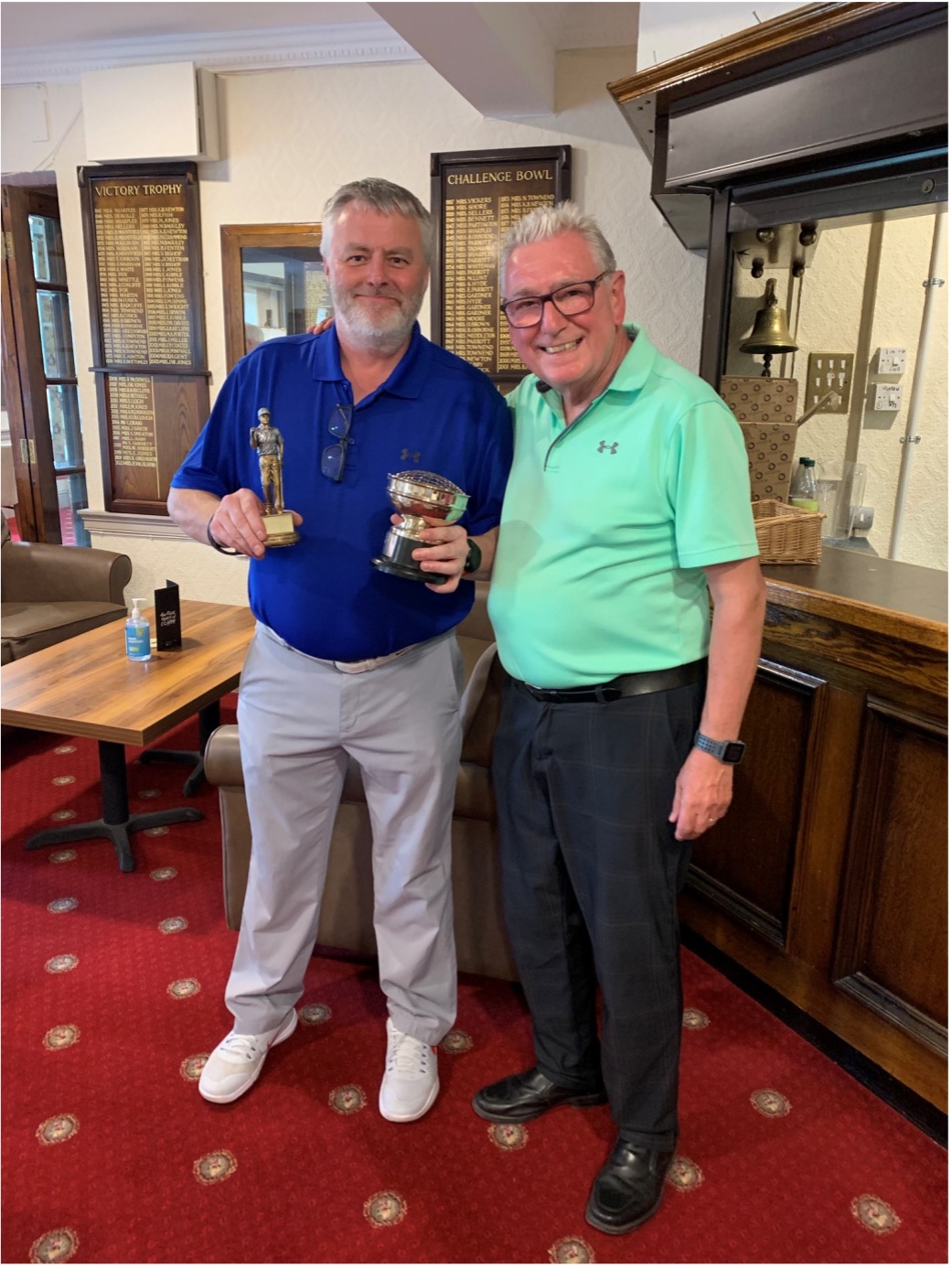 Its always a pleasure to play at Northenden and visit the Spike Bar dedicated to one of the greatest managers ever in British football. I don’t understand why some of our members don’t pay homage to the glorious portrait of Sir Matt Busby hanging in the said room.

Due to late entries and requests for an early start due to other commitments quick changes had to be made to the start sheet. John Martin needed to go out early as he was then travelling to his holiday mansion in Wales (but due to his performance at Marple was not trusted with the nearest the pins etc)

28 of us teed off eventually and the course didn’t disappoint. Six people achieved par or better on the day with Gus Demick (AKA Brian Murray) waking up from his slumbers to shoot a valiant 40 points.  Unfortunately this was not enough as once again we had a card playoff for first place between our Treasurer Mr Harriss  and much mentioned Mr Martin. All I can say is one of those people won but was unavailable for the presentation due to aforementioned prior commitment. The 9 shot difference between Bill and John made the difference, but that’s what handicaps are all about. It will be interesting to see what effect the 2.5 shot reduction has on John Martins handicap at the next event.

John requested no publicity in order to avoid tax on his winnings so no photograph of winner.

Once again there were no 2’s so the pot at Bury will be enhanced, I hope nothing happens there as some of us can’t make it.

We were on a tight schedule as the Hotel informed us that they didn’t normally serve food on a Monday so required us to eat at 6pm. A quick run back and shower and we were ready for Ernie’s Evening Entertainment. Mr Captain worked particularly hard during this trip, more to come later.

Following a hearty breakfast it was off to the borders with trip to Goswick Links just short of Berwick on Tweed. Scoring was very similar to Monday but with a surprise appearance in the winners’ enclosure of Andy Minshull following a few barren years. It was a day of surprises with Barbara Johnson outsmarting the men with a nearest the pin on the 15th.

Ernies quiz was now followed by a game of Killer Pool utilising the pool table in the bar. A misspent youth saw Jay Chambers taking on all comers in what was a follow up to his exploits in Turkey.

It was off to Bamburgh Castle next and it did not bring back happy memories from the last time we were hers pre Covid in 2019. The weather that  day was biblical and only about 6 people went out and only four finished. It seemed like Groundhog day again as we were greeted with a howling wind and torrential rain. We waited about 30 mins and most people agreed to go out, eventually the weather calmed and all 28 took to the course. This was a particularly challenging course with 6 par 3’s and the wind and rain ensured that three of them had an untouched green despite 28 people trying for a nearest the pin.  Still Steve Payne and Rob Goodwin-Davey managed to get 2’s to share the money.

A valiant effort from Dave Baynes just failing to catch Brendan (I’ve no chance of winning anything) Brady. So how did that affect overall  results and the winner of the Wales ( we may have to rename it) Trophy.